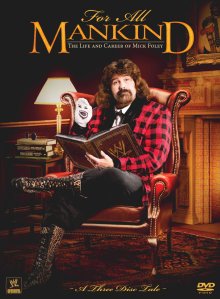 Mick Foley has revealed the great cover for his new DVD collection on Twitter and also given a hint of what the set will contain. For All Mankind features a documentary and plenty of matches from one of wrestling’s greatest ever stars from down the years from his early hardcore following to his time at the top in the WWE.

Foley commented: “I’m usually my own toughest critic, but WWE has really gone above and beyond with this bad boy. A few years ago, they started dramatically increasing the time and effort that goes into these productions, and it’s really apparent here. It just blows the A&E Biography piece away – and the extras are just great; stuff that anyone who really likes me will want to have in their collection. So many interviews with people who played a pivotal role in my life and career, including Terry Funk, Dominec DeNucci, Shane Douglas, Arn Anderson, Michael Hayes, Mike Rotunda, Vader (you’ll love the Vader/Cactus stuff) Kevin Sullivan, Paul Heyman, The Rock, family members, childhood friends, and some of today’s top superstars.”

For All Mankind, 3 discs of blood, action and Mr Socko is released on April 22nd.